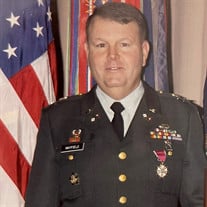 Funeral Services for Col. Bobby Mayfield, 71, of Euless will be held at 11 AM Saturday, April 2, 2022 in the Chapel of Horn-Nail-Haggard Funeral Home of Daingerfield. The family will receive friends beginning at 10 AM prior to the service. Burial will follow in Daingerfield Cemetery with full military honors presented by th Ft. Hood ARMY Base Honor Guard.. Bobby Eugene Mayfield (Bob) was born November 1, 1950, the first baby to be born in Flo Memorial Hospital in Denton, Texas. He is the eldest of five children. He passed away on March 30, 2022 in Southlake, Texas. He is survived by his wife of 41 years Dixie Anne; daughter Sarah Pierce (Brandon), and son Jason Mayfield. Stepdaughter Lori Love (Liz), stepson Craig Love (Namon). Grandchildren Landry Pierce, Anderson Pierce, and Daniel Mayfield. Step grandchildren Nathan Love (Kristina), Sienan Love, MaKenzie Love and Corey Love. Adopted grandchildren Dakota Frietze (Angela) and Savannah Frietze. Sister Yvonne Archer, brother Paul Mayfield (Vicki). And a host of nieces Dana Vaughn (Mike), Sarah Barnard (Guy), Rachael Singer (Evan), Kathryn Evans, Hilary Kapfer (Chris), Anne Fahrenholz (Jeff), Jane (Matt) and nephew Lance Archer (Mendy), Adam Mayfield, Kevin Mayfield, Travis Mayfield (Kelly), Jimmy Mayfield (Nicole) and Danny Mayfield. Bobby is preceded in death by his Parents Paul and Dora Mayfield, and brothers Donnie and David. He was a wonderful husband, father and stepfather to his children. He was a strong military leader reaching the rank of Colonel in the Army. He spent 34 years as a Signal Officer, and after retiring from the Army he spent ten years teaching JROTC. He also worked for NASA for five years as an Education Specialist during his career. As such he was assigned to work in the Teacher in Space program responsible for the science projects that the Teacher, Christa McAuliffe, would perform on the shuttle, and training with her on the KC 135 (Vomit Comet) to perfect the experiments. He could captivate an audience with his knowledge and explanations of NASA’s space endeavors. He loved people and never made disparaging remarks against anyone. Always a good listener; thoughtful before speaking. He was strong in good character, strong willed yet always fair. Bob is a man who never complained, if he believed something was wrong or unfair, he would take action to try and make things right. He was an outdoorsman and earned a Batchelor’s Degree in Wildlife and Fisheries Sciences. He was a sailor, fisherman, and swimmer. He had fun swimming with his brothers growing up and playing in the surf with his children and grandchildren. He tried to teach his sister Yvonne and wife Dixie to bait fishing hooks and take fish off the hooks. They never learned but had lots of fun catching fish. He was talented in so many ways, a leader, a gifted teacher, speaker, carpenter and always ready to help anyone out in any situation. When diagnosed with Alzheimer’s he never said why me Lord, he followed the advice of his doctors and strove to continue to live the best life he could.

Funeral Services for Col. Bobby Mayfield, 71, of Euless will be held at 11 AM Saturday, April 2, 2022 in the Chapel of Horn-Nail-Haggard Funeral Home of Daingerfield. The family will receive friends beginning at 10 AM prior to the service.... View Obituary & Service Information

The family of Col. Bobby Mayfield created this Life Tributes page to make it easy to share your memories.

Funeral Services for Col. Bobby Mayfield, 71, of Euless will...

Send flowers to the Mayfield family.