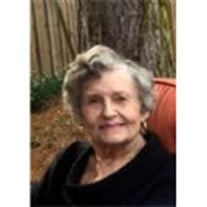 Graveside services for Doris Jean Scott, 91, of Daingerfield will be held at 10 AM Saturday, September 25, 2021 at Daingerfield Cemetery with Marcie McGill and Trey Scott officiating. Burial will follow under the direction of Horn-Nail-Haggard Funeral Home. Doris was born on June 24, 1930 in Gadsden, AL to James and Annie May Noles. She passed away on September 20, 2021 in a Longview nursing facility. She was a member of First United Methodist Church in Daingerfield where she served as the nursery director as well as on numerous committees. She was very involved with CASA as an advocate for children. She was the valedictorian of her graduating class in 1948 and worked with her husband John overseeing Beaver Brook Country Club from 1960 - 1980. She would eventually retire from Daingerfield - Lone Star ISD where she served as an assistant in the special education department. Doris was preceded in death by her loving husband, John Scott; son, Ricky Scott; grandson, Jade Scott; sisters, Bertha Powell, Opal Ogden; brothers, Lois Noles, Thomas Noles, and B.F. Noles. She is survived by her son and daughter-in-law, Johnny and Carol Scott of Daingerfield; grandsons, Trey Scott of Savannah, GA., Jordan Scott of Athens, AL., Jarrod Scott of Diboll; 8 great grandchildren; as well as brother and sister-in-law, Alvin and Martha Noles of Jackson, TN. The family ask that those in attendance please wear their mask.

Graveside services for Doris Jean Scott, 91, of Daingerfield will be held at 10 AM Saturday, September 25, 2021 at Daingerfield Cemetery with Marcie McGill and Trey Scott officiating. Burial will follow under the direction of Horn-Nail-Haggard... View Obituary & Service Information

The family of Doris Jean Scott created this Life Tributes page to make it easy to share your memories.

Send flowers to the Scott family.