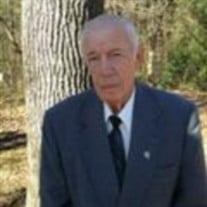 Services for Franklin D. "Frank" Sisk, 88, of Daingerfield will be held at 2 PM Sunday, December 5, 2021 at South Union Missionary Baptist Church in Daingerfield under the direction of Horn-Nail-Haggard Funeral Home of Daingerfield. The family will receive friends beginning at 1 PM prior to the service at the Church. A private family burial will be held in Daingerfield Cemetery. Frank was born on Friday, March 17, 1933 in Red Springs, Texas and passed away Sunday afternoon, November 28, 2021 in a Longview hospital. Frank was the son of Charles and Lowral (pronounced “Laurel”) Sisk and grew up in Nash near Texarkana. He was one of 15 children, with 9 brothers and 5 sisters. He attended school in Red Water, Nash, and Texarkana and proudly served in the United States Army for 4 years. Frank served in the Korean War in 1951, was a Private First Class, Paratrooper with the 82nd Airborne Division and made over 200 jumps. After serving in Korea, he was stationed in Heidelberg, Germany. He was honorably discharged in July 1953. When he returned to the States, Frank visited relatives in Daingerfield and never left. He met his wife, Annie Marie Foster at Daingerfield State Park at a Saturday night dance held at the pavilion overlooking the lake that is still there today. Frank and Anne were married on December 4, 1954 and celebrated 67 years of marriage. They had two children, Ronnie and Pennye. In 1953, Frank was employed at Lone Star Steel and worked there for 19 years, followed by 6 years at Mechanical Tubing Industries (“MTI”). He left to pursue his dream of starting his own business, working as an independent contractor, which he enjoyed for 15 years. In 1995, Frank was elected Justice of the Peace, for Precinct 4 in Morris County, and he served as JP for 20 years and retired in 2015. Frank was a man of faith and a long-time member of South Union Baptist Church. He served on the Daingerfield Volunteer Fire Department for 20 years where he not only helped put out fires in his younger years, but exercised his domino-playing skills with partners such as Wayne Campbell, E.G. McMillan and Johnny Wright. They played for bragging rights and to see who could tell the tallest tales. From Pee Wee to Pony League, Frank coached baseball for 23 years. He not only taught boys how to hit, throw, and catch a baseball, but also taught them life lessons about fair play, how to respect each other, how to try again after failing, and how to be humble when winning as an individual and as a team. Frank was also a member of the “McKinney Church Choir” and faithfully met for rehearsal every Wednesday night. He also attended daily “board meetings” with his fellow board members at Hawkins Restaurant to discuss both new and old business and serve as the welcoming committee for any new strangers who came to town. Frank was a simple man who made an impact as a public servant, a tireless worker, a selfless volunteer, a brave soldier, an encouraging coach, a faithful husband, a dedicated father, a loyal brother, a fun uncle, and a loyal friend to many. He inspired the rest of us to live a life of honor, to make a difference in the lives of our fellow citizens. We are grateful for his example, and he will be sorely missed by all who knew him. Frank is survived by his wife, Annie Marie, his daughter, Pennye Sisk, who resides in Brentwood, Tennessee, siblings Jim, David “Bud”, Glen of Nash, Texas, Alma Jo Kinsey of Lewisville, and numerous nieces and nephews. He was preceded in death by his son, Ronald Delano Sisk of Chesapeake, Virginia, his parents, his brothers Billy, Jesse, Charles, Ed, Jack and Harvey, and his sisters, Rene, Lois, Nell and Ruth. Special thanks to the emergency crew of the Daingerfield Volunteer Fire Department, the medical teams of UT Health Pittsburg, Longview Regional Medical Center and Heart to Heart Hospice Care. In lieu of flowers, the family asks that donations be made to the Daingerfield Volunteer Fire Department and to the Youth Ministry at South Union Baptist Church.

Services for Franklin D. "Frank" Sisk, 88, of Daingerfield will be held at 2 PM Sunday, December 5, 2021 at South Union Missionary Baptist Church in Daingerfield under the direction of Horn-Nail-Haggard Funeral Home of Daingerfield. The family... View Obituary & Service Information

The family of Franklin D. "Frank" Sisk created this Life Tributes page to make it easy to share your memories.

Services for Franklin D. &quot;Frank&quot; Sisk, 88, of Daingerfield will...

Send flowers to the Sisk family.