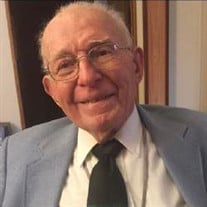 Guy I. Harris was born in Anna, Illinois June 1, 1926. He served in the Navy during World War II and received and honorable discharge on July 4, 1946. Guy married Ruth Platt on August 30. In 1950 he graduated from Minnesota Bible College with a preaching degree. He ministered to conservative Christian churches and churches of Christ in Wisconsin, Iowa, Illinois, Louisiana and Texas. At the time of his death, he was a member of the 12th Street Church of Christ in Shallowater, Texas. Preceding him in death are his wife Ruthie Harris, daughter-in-law Elaine Harris, and son-in-law Glen Bartlett. He is survived by four sons and one daughter; Guy Philip Harris of Cunningham, Kansas, Andrew Lind and Debbie Harris of Carlsbad, New Mexico, Sally Ruth Bartlett of Shallowater, Texas, Todd Joseph and Barbara Harris of Lewisville, Texas and Lance David Harris of Pampa, Texas, ten grandchildren, 13 great grandchildren, 1 great-great grandchild, and a sister, Linda and Jim Ross of Cordova, Tennessee. Mr. Harris was active in the Lions club for over 60 years and was inducted into the Texas Lion’s Hall of Fame in 2020. For over 35 years he served on the Dallas Christian College board of regents and was also a trustee. After his retirement from located ministry, he volunteered at the Christian Service Center in Daingerfield, taught Beginning Computer and GED classes at the Adult Learning Center in Loan Star, and served as chaplain for Eastman Estates Assisted Living in Longview. His most prized community recognition was the 2012 “Lifetime Achievement Award” from the Daingerfield Chamber of Commerce. Though his hearing failed, his vision dimmed, and he was home bound, he shared the Joy of Jesus with his Hospice caregivers. He considered them part of the family. Visitation will be held on Friday, January 14, 2022 from 5-7 PM in the Oak Crest Suite at Combest Family Funeral Home. Celebration of Life service will be held on Saturday, January 15, 2022 at 10am at the 12th Street Church of Christ in Shallowater with interment to follow in the Anton Cemetery.

Guy I. Harris was born in Anna, Illinois June 1, 1926. He served in the Navy during World War II and received and honorable discharge on July 4, 1946. Guy married Ruth Platt on August 30. In 1950 he graduated from Minnesota Bible College with... View Obituary & Service Information

The family of Guy I. Harris created this Life Tributes page to make it easy to share your memories.

Send flowers to the Harris family.