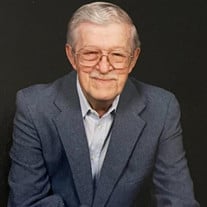 A celebration of life service for Herbert Glen Harris, 89, of Lone Star will be held at 11 AM Thursday, April 7, 2022 at the First Baptist Church in Daingerfield with Bro. Danny Broughton officiating. Arrangements are under the direction of Horn-Nail-Haggard Funeral Home of Daingerfield. Mr. Harris was born on November 18, 1932 and died Saturday at an area hospital where he was being treated for pneumonia. He is survived by three daughters, three sons-in-law, the grandchildren, a brother and two sisters, two brothers-in-law. They are Lynda and Rickey Coker of Arlington, Hope and Tim Engle of Melbourne, Florida and Hillary and John Vallie of Little Rock, AR. Grandchildren: Amy O’Neal of Euless, Chad Helfenbein of Richland Hills, Texas and Lawson Darrow of Cocoa Beach, Florida. Siblings: Billy Wayne Willson of Mt. Pleasant, Susie and Larry McMurray of Olive Grove, MS and Bobbie Sharon and David Martin of Tyler. Mr. Harris’s birth was at home, the home of his grandmother, Mattie Jo Reynolds, on November 18, 1932. He was the son of Alton Harris and Eloyse Reynolds Harris. He attended Texarkana Texas schools, playing football for Watty Myers. His athleticism earned him a scholarship to SMU, but he attended only briefly before enlisting in the US Air Force at the start of the Korean War. He was sent, instead, to Germany where he helped “hold the line” against East Germany in Bavaria as part of the “Fursty” Furstenfeldbruck air force contingent. Achieving the rank of Airman 1st Class, he was discharged after four years. Returning home to Mt. Pleasant, he joined his stepfather, R. L. Willson, in operating the area Borden Milk franchise. He left the milk business for a long time career at Lone Star Steel Co. He stayed more than 30 years. Harris made his home in Lone Star and had the distinction of becoming the longest serving active member of Lone Star Steel Credit Union. The family will receive friends from 10 am until service time Thursday at the church.

A celebration of life service for Herbert Glen Harris, 89, of Lone Star will be held at 11 AM Thursday, April 7, 2022 at the First Baptist Church in Daingerfield with Bro. Danny Broughton officiating. Arrangements are under the direction of... View Obituary & Service Information

The family of Herbert Harris created this Life Tributes page to make it easy to share your memories.

A celebration of life service for Herbert Glen Harris, 89, of...

Send flowers to the Harris family.