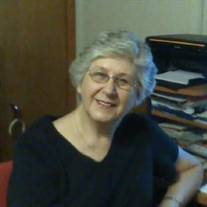 Funeral services for Iona Fay Maricelli, 83 of Daingerfield will be held at 2 PM Wednesday, April 20, 2022 a in the Chapel of Horn-Nail-Haggard Funeral Home of Daingerfield with Bro. Scott Darby officiating. Burial will follow in Bradfield Chapel Cemetery. The family will receive friends beginning at 1 PM prior to the service. Iona was born on May 1, 1938 in Walters, Oklahoma. Eventually her family moved to Texas for job opportunities, and settled in Arlington, Texas. Iona met her future husband, Ed Maricelli in Pasadena, Texas and they were joined in holy matrimony on September 18, 1965 at the Thomas Ave. Baptist Church in Pasadena, Texas. They remained by each others side for 55 years. She was an avid artist, painter, musician, and writer. Many family members and friends have her paintings hanging on their walls. Iona's love of children led her to write and have published an illustrated children's book. She also loved gospel and Christian music, so she released several cd's of her own Christian music. Iona loved to travel, but was terrified of flying, so her and Ed traveled America by car, enjoying the trips as much as the destinations. She was preceded in death by her husband Ed and her grandson Jules. "She and Ed raised 4 children in their blended family; Dennis, Fay, Jeff, and Mike. And later was reunited with a son that she had had to put up for adoption years earlier. That son, Earl, has now become part of her current family. They all join together in this celebration of her Life." Those left to cherish her memory are her sons, Dennis Maricelli and wife Amy, and Jeffrey Maricelli all of San Antonio, TX and Michael Maricelli of Daingerfield; daughter, Fay Mullins and husband Kerry of Gilmer; 7 grandchildren; and her sister, Julia Butler of Provencal, LA. Iona will be remembered for her picking and singing that brought much joy to many, many people.

Funeral services for Iona Fay Maricelli, 83 of Daingerfield will be held at 2 PM Wednesday, April 20, 2022 a in the Chapel of Horn-Nail-Haggard Funeral Home of Daingerfield with Bro. Scott Darby officiating. Burial will follow in Bradfield... View Obituary & Service Information

The family of Iona Fay Maricelli created this Life Tributes page to make it easy to share your memories.

Funeral services for Iona Fay Maricelli, 83 of Daingerfield will...

Send flowers to the Maricelli family.