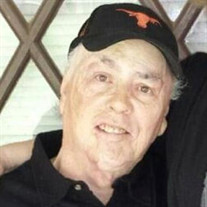 Graveside services for Jimmy Carl “J.C.” Hammonds, 74 of Ore City will be held at 10:00 a.m. Saturday, April 23, 2020, at Veal Switch Cemetery in Hughes Springs with Bro. Craig Evers officiating. Burial will follow under the direction of Horn-Nail-Haggard Funeral Home of Dangerfield. The family will receive friends from 5 to 7 PM Friday, April 22, 2022 at the funeral home. Jimmy Carl Hammonds was born in Naples Texas to Cory L. Hammonds and Geneva J. Hammonds on May 24, 1947. He spent his childhood in and out of the hospital because of a house fire. He found new family like Mr. and Mrs. Watkins that loved him very much. Jerry, their son, and he were the best of buds. He stayed with different family members throughout those years and started working at a very young age. He worked where he could and raced as many cars as he could get his hands on. He enjoyed a good game of poker and loved racing the strip in Galveston Texas. He met his wife in 1969 and told her that very day he was going to marry her. They raised 3 boys together. He worked as a welder and a mechanic for several years. He found the lord in 1973 and hasn’t stopped talking about it since then. He was very active in church and took soul winning classes. He helped bring many people to the lord. It was one of the things he was most proud of. In 1975 he went to Kilgore college to become a jeweler. He worked as a jeweler for 15 years and owned his own store. Jimmy said in 1977 he found this kid by the name of Ricky Evans fighting in a parking lot. He broke up the fight and him and that kid have been best friends and brothers ever since. He tells everyone he is the older better-looking brother. Later Jimmy packed up and decided to be a truck driver for over 5 years. Him and his family traveled all around the country hauling loads. He and his brother-in-law would pick up loads wherever they could. Over the years he adopted as many kids and grandkids as he could. If you ever met him, you were considered family. He and his loving wife spent the later part of his life camping and having a grand time with family and friends. His best days were spent with his grandchildren being the best One-Legged PawPaw a man could be. His many stories will live on through his family and friends. If you ask his grandkids, he is a legend. He wanted everyone to know that no matter what, you have the big H riding with you. He was preceded in death by his parents; and sister, Regina Hammonds. Those left to cherish his memory are his loving wife of 52 years, Mary Y’Vonne Hammonds; son Jerry Hammonds and wife Mary and their children, Hailey, Trenton, and Rebecca Hammonds; son Anthony Hammonds and his children, Dakota Harrell and Zachary Hammonds; son Brian Hammonds and wife Jacci and their children, Jennifer Hammonds and Karley Nix; great grandchildren Cloie, Cooper and Kinlea; and his brother, Rickey Evans, Sr.

The family of Jimmy C. Hammonds created this Life Tributes page to make it easy to share your memories.

Send flowers to the Hammonds family.