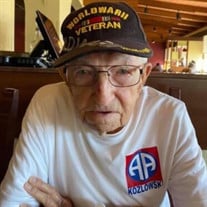 John Joseph Kozlowski, age 103, of Daingerfield, Texas, passed away Monday, January 10, 2022, at his home. John was born December 27, 1918, in McKees Rocks, Pennsylvania to Ignatius and Blanch Kozlowski. John served in WWII (1942-1945). He was a veteran of the United States Army. He was also a member of the Mason, Shriners, and Scottish Rite Organizations. John worked with the State of Missouri Department of Corrections for many years that lead to his retirement in 1998. John is preceded in death by his parents, five siblings, wife of 45 years Hazel Jean Kozlowski, and two sons Barry Kerby and Everette (Dude) Kerby. He is survived by one brother and sister in law Norman and Jeannie Kozlowski of Pittsburgh, PA. Two daughters, Renee and Al Cote of Knob Noster, MO, Aleta and Bill Harper of Daingerfield, TX. Four sons, Jerel and Zully Kerby of Avinger, TX, Jesse and Evelyn Kerby of Dickson, TN, Vernon and Janet Kerby of Arlington, TN, John and Erica Kozlowski of Malibu, CA. One daughter in law Linda Kerby of Hernando, FL. He was greatly loved by his 27 grandchildren, 66 great grandchildren, 2 great-great grandchildren, and many nieces and nephews. Funeral services will be held at 2 PM Friday, January 14, 2022 at Fellowship Baptist Church in Daingerfield with Bro. Doye Wilbanks officiating under the direction of Horn-Nail-Haggard Funeral Home of Daingerfield. The family will receive friends from 1 PM until service time at the church. Graveside services will be held at 2 PM Sunday, January 16, 2022 in Czar Cemetery in Crawford County, MO.

The family of John Kozlowski created this Life Tributes page to make it easy to share your memories.

Send flowers to the Kozlowski family.