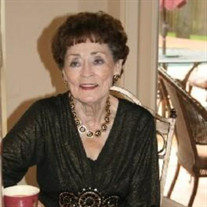 Joyce Marie McCain was born in Pittsburg, Texas on August 16, 1934, to Willie & Lydia Mullins and passed away, Saturday, June 9, 2012 in Longview Texas. Services will be held at Daingerfield Church of Christ in Daingerfield, Texas on Monday, June 11, 2012 at 2:00 P.M. with Norman Miller officiating. Burial will be in Daingerfield Cemetery. Arrangements are under the direction of Nail-Haggard Funeral Home.Preceding her in death, were her parents, husband; Wiley McCain; grandson, Tres Stover and granddaughter, Dana London.She is survived by two daughters; Judy Lattery and Janet Fleming, both of Longview; grandchildren; Paul and Heather London, Lisa and Dewayne Snider, Jeanna Nix, Melissa and Shane Gray and eleven great grandchildren. Also surviving are brothers & sisters; Margie & Gerald Hargrove of Daingerfield, Ray Mullins, of Desoto, Faye Lewis, of Diana and John & Martha Mullins of Mt. Vernon and many nieces and nephews and great nieces and great nephews, along with many, many cousins. Joyce moved to Longview in 1969 and soon became involved in activities with American Business Women and held several offices with that group including being named woman of the year in 1972. Joyce and Wiley were also involved with the Fraternal Order of the Elks and Joyce held many offices there also. Joyce was a manager for a jewelry firm in Newark, NY and hired and trained representatives who sold the products via a party plan. Joyce and her ladies led the entire nation in sales of Sarah Coventry Jewelry. She was named Manager of the Year 1975, by the company and she and Wiley were wined and dined by the entire staff in Newark, New York, where she was honored for several days.After retiring, Joyce joined forces with her dear friend, Vic Ferchill & the Knights of Columbus and aided in the start up of the Heartland Celebration for the July 4th Parade & Festivities in Longview. Joyce worked tirelessly and managed the fairground events plus holding many offices in the organization for ten years, along with many others who loved their city of Longview.Family will receive friends from 6:00 P.M. till 8:00 P.M. Sunday at the funeral home.Online condolences may be made at Nail-HaggardFH.com

Joyce Marie McCain was born in Pittsburg, Texas on August 16, 1934, to Willie & Lydia Mullins and passed away, Saturday, June 9, 2012 in Longview Texas. Services will be held at Daingerfield Church of Christ in Daingerfield, Texas on Monday,... View Obituary & Service Information

The family of Joyce Marie McCain created this Life Tributes page to make it easy to share your memories.

Joyce Marie McCain was born in Pittsburg, Texas on August 16,...

Send flowers to the McCain family.