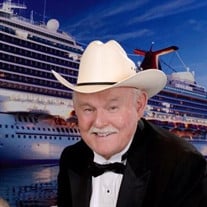 Roy George Kearns, Sr., 85 years of age, formerly of Weatherford, TX passed away peacefully at his home on February 12, 2022 at 11:16 p.m. in Naples, TX surrounded by his beloved daughter and her family. He was born on January 5, 1937 in Fort Worth, TX. He was the only son of John Dunlap and Estelle Mc Knight Kearns. Roy was the original “Fonzy”. He was kicked out of Diamond Hill Jarvis High School of Fort Worth for wearing his pants too low. He eventually got his GED and went to Arlington Baptist College which is now known as Arlington Baptist University. He received his license certificate as a Minister of the Gospel in the state of Texas. At the age of 17, he met the love of his life Mary Holden age 15. After a short courtship, they married on December 4, 1954 and celebrated 64 ½ years of marriage prior to her passing. They had 5 children, 4 daughters and a son. Roy retired several times in his life. He retired from Bell Helicopter (Textron) as a machinist. He was a professional sign painter, which he learned that trade from his dad, and started Kearns Signs. He painted signs all over Parker County. He worked part time in the golf shop and the Live Oak Country Club so he could play for free. He finally retired as an “Old” Man Door Greeter from Wal-Mart of Mount Pleasant, TX on December 24, 2018 to take care of his loving wife who had had a stroke at the end of 2015. Roy had many hobbies throughout the years. He started playing the drums in honky tonk/beer joints at the age of 13. He even played at our church in Naples, TX for a couple of years. Most people don’t know, but when he was younger, he was a very active Mason in the Fort Worth, TX community. He also enjoyed fishing, playing golf and being a HAM Operator N5KTJ. Until May 2021 he would still enjoy going outside in the back yard to hit golf balls. His favorite hobby of all time was eating! His favorite food was hot and spicy Tex-Mex and authentic Mexican food. He was named our human garbage disposal. Even my co-workers would send daddy their leftovers! In addition to his parents John and Estelle Mc Knight Kearns, he was predeceased in death by his loving wife Mary Holden Kearns; son, Roy George Kearns, Jr.; sisters, Charlene Kearns Burgess and Linda Kearns Haggard. Surviving are his daughters, Rhonda Kearns Bassham of White Settlement, TX, Darla Kearns and husband John Drake of Naples, TX, Dedra Kearns and husband Charley Vick of Peaster, Dana Kearns Mc Michael of Weatherford, TX; 10 grandchildren; 15 great grandchildren; many nieces, nephews, great nieces and nephews; cousins and friends who are like family. A memorial service were held at Liberty Baptist Church, 204 Daingerfield Street, Naples, TX 75568 on Saturday, March 5, 2022 at 11:00 a.m. Private Family interment will be held in Naples Cemetery on Saturday, March 12, 2022 under the direction of Horn-Nail-Haggard Funeral Home of Daingerfield. Written by: Darla Kearns James Drake

Roy George Kearns, Sr., 85 years of age, formerly of Weatherford, TX passed away peacefully at his home on February 12, 2022 at 11:16 p.m. in Naples, TX surrounded by his beloved daughter and her family. He was born on January 5, 1937 in Fort... View Obituary & Service Information

The family of Roy George Kearns Sr. created this Life Tributes page to make it easy to share your memories.

Send flowers to the Kearns family.