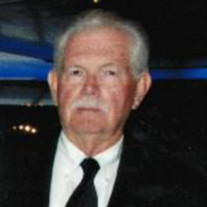 Memorial services will be held for Wesley L., (Buddy), DDS at the First United Methodist Church of Daingerfield @ 3:00 p.m. Monday, September 12, 2011 with Rev Dan Gilliam officiating.Dr. Ballard entered his Heavenly Home on Friday, September 9, 2011, after a short battle with Parkinson's disease & heart disease. He was at home, surrounded by his family. Dr. Ballard was born October 19, 1933 in Atlanta, Texas to Wesley L., & Edith Wall Ballard. He was a graduate of Atlanta High School, & attended Arlington State College receiving an associate of Science degree in Biology. He also attended NT State University, & was accepted to the University of Texas Dental School in Houston, Texas. While in school, Dr. Ballard was involved in student affairs & active in the Xi Psi Phi Dental Fraternity. Upon completion of his Doctor of Dental Surgery Degree in 1958, Dr. Ballard served i the US Army Dental Corps with the rank of Captain, USADC. Dr. Ballard was stationed in Ft. Sam Houston, Texas, Ft. Huachauca, Arizona, Deoul Korea, & Ft. Hood, Texas.After receiving an honorable discharge, Dr. Ballard moved to Daingerfield, Texas in 1961, and began his practice spanning 35 years upon his retirement in June 1996. Dr. Ballard was the first Doctor in Daingerfield to have a non-segregated waiting room for his patients.Professionally, Dr. Ballard was a member of the ADA, TDA, and first District Dental Society of East Texas. During this time he was active in many community affairs. He was a member of the Daingerfield Chamber of Commerce, Kiwanis Club, which he served as President & a member of Beaver Brook Country Club, serving on the Boards of Directors for several years. Golf & tennis were pastimes he loved. In golf he was Club Champion three concurrent years, and received many awards throughout the tri-state area.He loved the youth of Daingerfield, and was very active in the baseball programs which he coached for many years. He enjoyed the game & especially working with the young kids of the community. It gave him great pleasure & he gave freely of his time, his professional services & helped with many expenses when needed.Dr. Ballard was an avid Texas Longhorn Fan, & a Life Member of the Longhorn Foundation & The UT Exes Association.He is preceded in death by his parents, and a sister, Peggy Ballard Cowan.Dr. Ballard is survived by his loving & devoted wife, Laura Sue Ballard of Daingerfield, his son & Daughter-in-law Jason & Julie Ballard of Batesville, Ark,, his daughter & son-in-law Jana & Tom Ezernack of Tyler, his son & daughter-in-law Ty & Naho Harvey of Oneonta, New York, & grandchildren Mattie Ballard of Batesville, Ark., & Alex Ezernack of Tyler, Texas. His brother, Larry Ballard of Atlanta, & brother-in-law, Mike Roasa of Sparks, Texas & Mother-in-law, Helen Roasa of Academy, Texas. Four Nephews & two nieces & one grand nephew, & very special "Brother" Frankie Manna.Dr. Ballard was an active member of the First United Methodist Church.A very special Thank You to CareTeam Hospice & their wonderful staff, especially Nurses John & Michelle. They made his special journey so much easier, & their kindness & professionalism will never be forgotten.Thanks also to Nell Secord & her sitters Kim McGowen, Tammy Abbott & Rita Steele. Enough cannot be said about you all. Your compassion & talents & love shown to Dr. Ballard were appreciated more than you'll ever know.Interment will be in Laws Chapel Cemetery next to his beloved Mother at a later date.In lieu of flowers, please make memorials to the First United Methodist Church or charity of your choice.

The family of Wesley Lee Ballard created this Life Tributes page to make it easy to share your memories.

Memorial services will be held for Wesley L., (Buddy), DDS at...

Send flowers to the Ballard family.